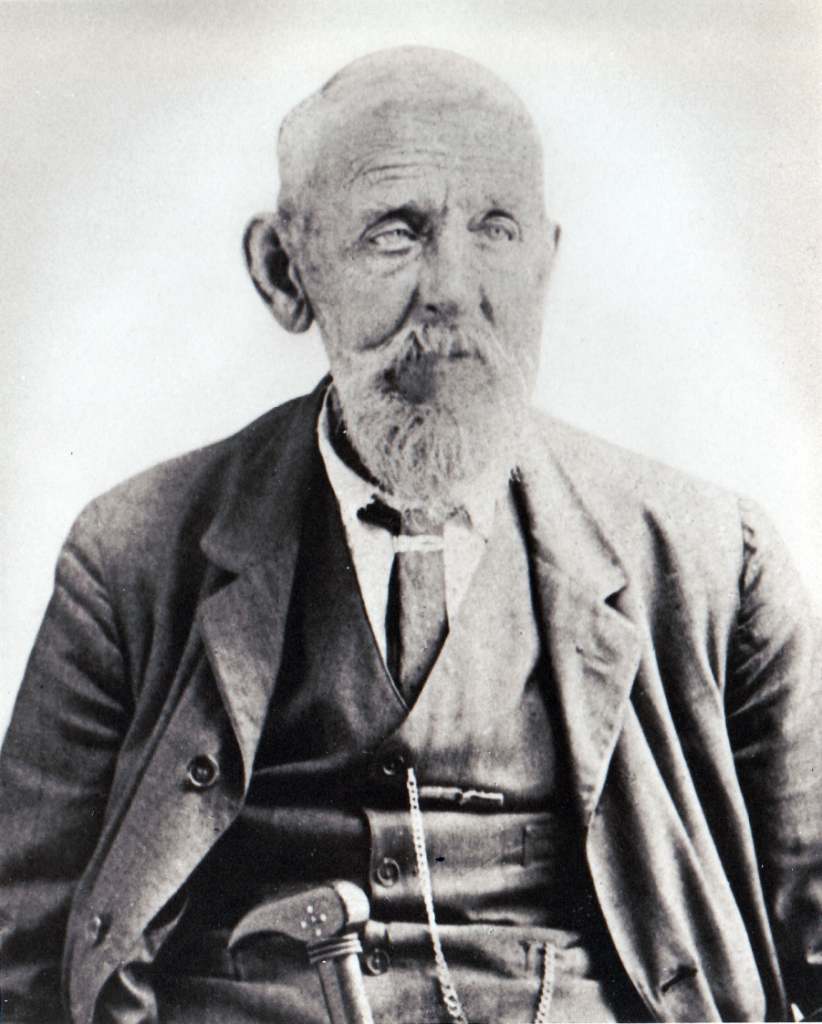 The following is information that I have gathered on my great grandfather Frederick Grubb and other members of the family.

Frederick William (possibly also Benjamin) was born in 1831 in Macclesfield Cheshire England. Frederick, at 10 years of age in the 1841 census, was the youngest child to William and Mary and brother to Joseph (13), Thomas (15) and William who was 18 years old at the time. Jane, at 16 years old in 1841, appears to also be Frederick’s sister. Frederick’s family, and their greater family in the area, were all in the silk weaving industry. Frederick’s father William was also a silk weaver who was born in Dublin Ireland in 1801 where the greater family there that I know of were also mainly in the silk weaving industry.

My researching in England and particularly before 1826 in Ireland has been complicated by a number of issues including that the family appear to have moved to a new country every 2 to 3 generations, that my branch of the family are from Frederick’s third marriage at age 49, that our family records in Dublin were destroyed during the infamous “Four Courts” records office fire in 1922, also that there are the very well-documented and successful so-called “Tipperary” Grubbs who have spread across the world from Ireland and to whom my Grubb line are not directly related according to the results of DNA testing.

My story starts in the Middle East 20,000 years ago where the 2004 results of DNA testing of the male line (‘Y” line) of my family by Oxford Ancestors has revealed that the men are members of the so-called “Wodan” tribe. According to other sources these Haplo type I people had moved from the Middle East to the Iberian Peninsula in Spain by the last glacial maximum 15,000 years ago and then on to the area of Denmark by 5,000 years ago.  The DNA test in 2004 finds the men being classified as Anglo Saxon or Danish Viking as described by Oxford Ancestors in their “Tribes of Britain” classification. 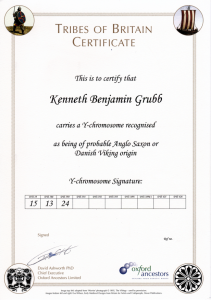 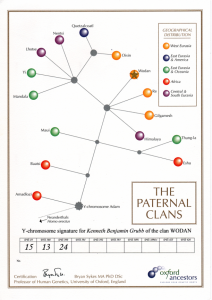 There has however been a significant update in the knowledge of my Grubb mens DNA since 2004.  More recent and advanced DNA tests at Family Tree DNA have revealed that my Grubb ancestors are a subgroup of the IM223 Haplo group and that the Anglo-Saxons and Danish Vikings are my genetic cousins.  The IM223 group are unique to the British Isles being the first group that arrived there after the last ice age about 9000 years ago.  These people were the megalith builders, such as Stonehenge, that predate the Celtic people by many thousands of years.

DNA testing of other Grubbs around the world is revealing that the men have come from diverse origins including old British, Anglo Saxon, Danish Viking, Norse Viking, Celtic and other backgrounds so that today’s Grubbs come from more than about 15 separate unrelated DNA lines. There are obviously many ways that our surname with such a range of DNA backgrounds could originate, including the probability that our name is a Germanic ‘trade name’ originally to do with activities connected with digging in the ground such as mining etc. In any case the Grubb (Grubbe) name is one of the oldest names around which appears to have originated in Denmark around 800 AD, spread to the general area we now know of as Germany by 1000 AD, into England by 1200 AD and then to most former English colonies by the 1800s. The Grubb name, because of its age, has many spelling variations including Grubbe, Grubb, Grube, Grub, Groob and in the USA Grubbs etc.

Some of the Danish, German and Austrian Grubb lines achieved very high standing between about 1000 and 1750 AD. The picture below shows a Grubb castle (Grubenhagen) in its original form, in the Hartz Mountains of Germany. Other Grubb castles are known from Austria (Grubb-Muhle, Kurnburg, Wolfstein and Luftenburg) as well as Denmark-Sweden (Malmo) and Holland i.e. Grubbenvorst. 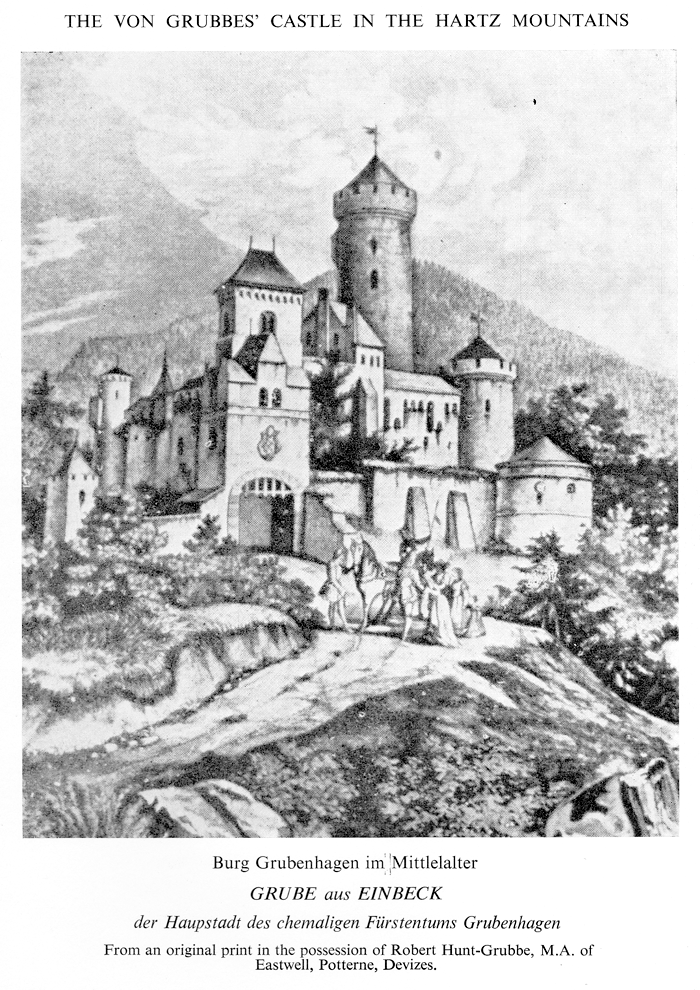 Ref. “The Grubbs of Tipperary”

Saxo Gunde (Grammaticus) Grubbe (also known as Saxo Grammaticus) wrote the first history of Denmark between 1185 and 1208 AD and Shakespeare’s play Hamlet is reputed to be based on one of Grammaticus’ stories of the life of the Danish prince Amleth Grubbe. In addition Erik Grubbe commanded the first Danish fleet to India in 1619. His wife died in childbirth at the Cape of Good Hope, where mother and child were buried. Well documented Regitza (1618 – 1689) and Marie (1643 – 1718) Grubbe married crown princes of Denmark, however the first crown prince died before his coronation and Marie’s marriage was subsequently annulled. There have been many other notable Grubb lines in Denmark, Germany, Austria, England and the USA right up to the 2005 Nobel prize winner for chemistry i.e. Robert H. Grubbs from the USA.

My researching has also revealed that IM223 men of Irish ancestry going back to the 1700s, who have very good paper trails, show that their male ancestors go further back into Scotland. The book “Grubbs About the Globe” also states that the “antiquity of the Grubbs of Scotland must vie with the antiquity of the Grubbs in England”. This is apparently borne out by the existence of the Barony of Grubbet, in Roxburgh in the borders region, in the period 1180 – 1280 AD with the men having the name of Grubbehewed.

My researching in addition revealed that at least four separate Grubb lines lived in Ireland around the 1750s. Could the Alexander Grubbe who lived in Dublin between 1180 and 1200 AD be of my line or could he have been of the Danish Viking line, as Dublin was a Viking settlement in those times? Interestingly the ‘Tipperary’ Grubb men, who are stated to have arrived in Ireland from Northamptonshire in 1642, have the same ‘Y’ line DNA as a Northamptonshire Grubb man with a longstanding history in that part of England, those men apparently being of the Haplo IM 253 Danish Viking line.

Moving forward, I now know that the male ancestors of my Grubb line reached the British Isles at least 7,000 years ago, and Ireland in particular at least 6,000 years ago, based on ‘Y’ line DNA testing from male skeletons from County Clare and Newgrange in County Meath. The ‘Y’ line testing of those skeletons has revealed that my ‘Y’ DNA is a direct downstream sub-group mutation of those tested skeletons. Furthermore my ‘Y’ DNA result has been placed in the Isles Scots-Irish subgroup 1B (genetic markers >S7753 > Y23716 >Y70079) of the IM223 ‘Y’ Haplogroup study which currently has 4,953 members from around the world. So the latest information is that my male line extends back from Australia to South Africa to England to Ireland in the 1700s, probably to backwards to Scotland and then backwards to other part of the U.K, for at least 6000 – 7000 years.

What I know is that Frederick’s father William, and his uncles Thomas, Richard and probably George and Edward, were all silk weavers with the Church of Ireland and born in Dublin between about 1793 and 1801, also that William’s family had moved to the Macclesfield Cheshire area in England by about 1820 as Frederick’s eldest sibling William was born in Macclesfield in about 1823. Great grandfather Frederick by 1851 is married and is a silk weaver, his first marriage being to Rose Hannah Gould on 14 October 1850 at St Peter’s Prestbury, Cheshire. In the meantime Frederick had signed up with the 28th Regiment of Foot at Salford, Gloucester as a private on 29 May 1851, and Rose Hannah died (reason not known) in 1853. By 1855, now Corporal Grubb was in Malta, which was the staging post for the Crimean War in today’s Turkey. His military service in the Crimea gained him the Crimean War medal with clasps for the Battles of Alma, Inkerman and Sebastopol, as well as the Turkish Crimean medal. Frederick was also hospitalised at Scutari in Istanbul where he would undoubtedly have seen Florence Nightingale. Frederick was again back in Malta by 1857 before being shipped to India (Bombay, Nuseerabad and Khamdella) and then being discharged on 16 November 1861 in Fermoy, Ireland. It should be noted that troops in those days were sent from England to and from India by ship via the Cape of Good Hope. This may account for Frederick’s future permanent settlement in the Colony of Natal. 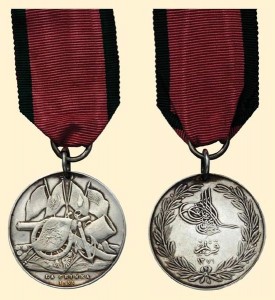 By 1871 we hear of Frederick being listed as a shipyard labourer in Freeman Street, Hartlepool, England, and is also now remarried to Mary Wilkinson, the marriage having taken place in Hartlepool in 1865. I have no further knowledge of Frederick’s second wife Mary Wilkinson other than there appeared to be no children from the marriage.

I know little of Frederick’s movements between 1871 and 1879 when he married for the third time at age 49 to Jane Elizabeth Horner (nee Cunningham, from Yorkshire) now in Pinetown in the colony of Natal in 1879. Jane already had two children when she married Frederick , i.e. Isabella Horner and Louisa Horner. Isabella stayed in Durban in the colony of Natal and subsequently married a Mr Mace. Louisa returned to England at a young age and subsequently married a Mr Thorpe. Jane and Frederick had six children, i.e. Mary Jane Grubb (married a Mr Bennet then a Mr Coutts), Frederick William Grubb (22.2.1881 – 6.10.1957 – my grandfather), Rose Hannah Francis Grubb (married a Mr Turner), Albert Edward Grubb (21.11.1890 – 1.3.1960), Johanna Grubb (11.8.1889 – ? – married a Mr Grice) and Elizabeth Ellen Grubb who died at 11 or 12 years of age due to a choking accident.

Some of the Grubb family remained in the Macclesfield area. George Grubb (photographic artist) and daughter Eugenie Grubb, the pioneer 19th century woman photographer from Macclesfield, are from our line. The unusually named Youall Grubb in the U.K. also appears to be from our line. Two other lines that have been identified are that of Reuben and brother Richard Grubb (silk weavers of Macclesfield) who migrated to the silk weaving community of Paterson in New Jersey in the U.S.A. in about the 1860s. Grubb men in the U.S.A, with the relatively unusual English name of Reuben, are possibly all related to the original Reuben from Macclesfield in the U.K.

In Natal Frederick worked firstly on the sugar cane farms, then as a prison warder and finally as a platelayer on the Natal Railways. He obviously tried to reinvent himself following the decline of the silk industry in England in the 1850s. If nothing else, he can be described as an adaptable fellow and a survivor, having seen a bit of the world including England, Malta, Turkey, India, Ireland and Natal in today’s South Africa before he passed away in Durban on 18 April 1908 at the age of 77.

Finally, my researching needs to continue. Hopefully one day I will manage to get more information on other lines of my family in the U.K. or around the world. Get your DNA tested to find out from which line you really are! The results could also help me.

I will be very interested to get feedback from all those Grubbs that are related to my line. Please leave a comment by completing the form below.

This entry was posted in Uncategorized. Bookmark the permalink.